What is Functional Neurological Disorder (FND)?

Functional Neurological Disorder (FND) is a condition that affects the central nervous system. It usually presents with changes in motor or sensory function. When medically examined, people suffering from FND show very specific physical signs. Doctors examining patients with FND can recognize these specific signs. These signs, along with clinical history, is what confirm the diagnosis of FND. Tests, like CT scans, MRIs and lab tests are usually normal in people with FND. Normal scans and tests leave patients with much uncertainty about their illness. Often more and more tests continue to be requested for patients with FND. These tests continue to come back normal, or irrelevant again and again. The fact that these tests are normal or irrelevant doesn’t mean that there is no illness, nor does it mean there is a need for more tests. Functional Neurological Disorder is a clinical diagnosis, made reliably by experienced clinicians, based on patient’s history and examination.  There are many illnesses that can be accurately diagnosed based on history and clinical examination. There are many illnesses that dont cause changes in scans and blood tests.

Functional Neurological Disorder is not a “rename” of old unaccepted diagnostic terms. It is a more accurate term that was introduced to explain a valid illness of the central nervous system conditions.

How does FND happen?

Symptoms of FND happen because of  changes in the way the brain and other parts of the nervous system handle data and information. This occurs without damage in the visible or detectable structure of the nervous system. As it is known to many, the Central Nervous System (brain and related structures) form an information processing system. It can incur problems in information processing mechanisms as much as it can incur problems in its hardware. Problems in the way the Central Nervous System handles information is what lead to the symptoms of FND. Problems in the hardware is what leads to another group of illnesses, known as Structural Neurological Disorder. Many people find the "hardware-software" analogy to give a good explanation of this condition. In this analogy, Functional Neurological Disorder results from software problems within the brain’s information processing system. While this analogy is imperfect, it can still help us understand FND.

The brain contains about 80 billion nerve cells forming trillions of synapses (connections). These cells and connections create a complex communication network that enables us to process massive volumes of information about our bodies and the outside world. Accurate handling of this information is necessary in order to perform our bodily functions, walk, talk, sense, think...... "Data events" can interrupt this communication without any physical damage. Problems then ensue in how the brain sends or receives information that are critical to movements, sensations and cognitions. Action plans within the brain become gradually reprogrammed, replacing the automatic processes that were once running the motor, sensory and cognitive systems smoothly.

How Common is Functional Neurological Disorder, and who does it affect? 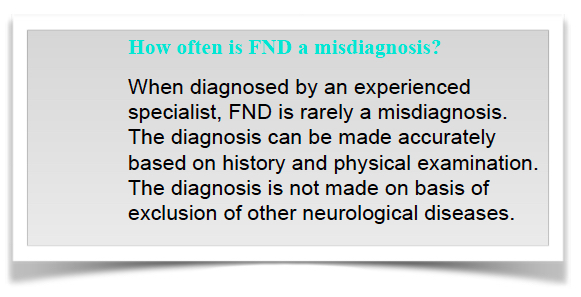 What is the typical course of Functional Neurological Disorder ?

Functional Neurological Disorder can cause significant disability like any other condition, sometimes, more. According to some research, Functional Neurological Disorders affecting the motor system can cause as much disability as Parkinson’s Disease.  Some patients with FND may require monitoring to ensure that they do not develop other conditions. FND is not known to progress to any other diseases though.  Our experience confirms with clarity that patients with FND who continue to challenge themselves through work, education, hobbies and learning show more signs of improvement in the long term.

Other Information about symptoms and treatment